Recycling, the feel-good story too good to be true

We’ve learned that sorting our waste to recycling was the ideal way to do our part, while it might actually be part of the problem?

It’s funny how we used to talk about recycling in school when we were kids. You throw your trash in the right bin, and all is right with the world.

Well, not exactly! As it turns out, we were only solving a tiny piece of a much larger problem. — but it's not too late to fix things.

In 2020, the E.U. generated 79 million tons of packaging waste.
If this waste was stacked up, it would be as tall as 830 Eiffel Towers! 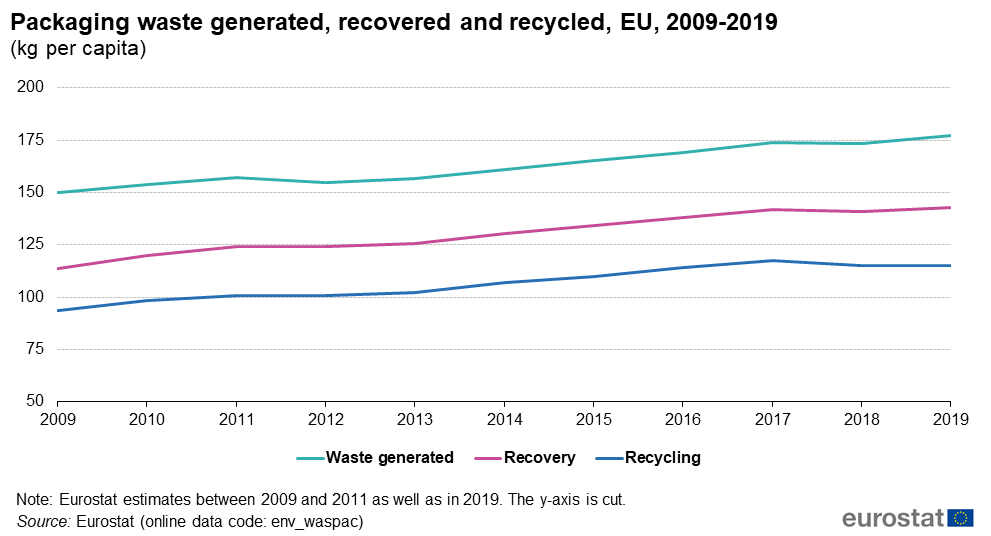 How much of this was really recycled and where? Hard to say for sure.

Data fails to show what was recycled in the E.U. or outside of it. Some of the waste considered recycled in Europe was actually shipped outside of the E.U., simply because countries generate more waste than they can recycle at home.

The ever-growing, overwhelming flood of packaging waste into the market kills any chance of recycling keeping up. It’s especially true for single-use plastic packaging, where the recycling rate is low - and decreasing. 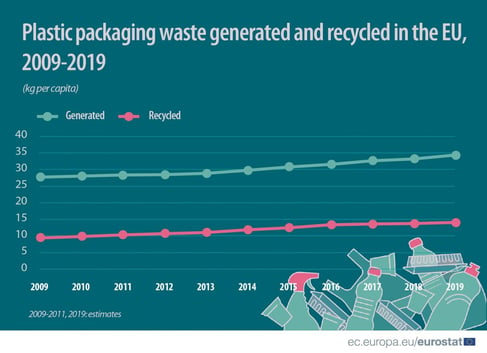 More and more countries are relying on the “waste-to-energy” technique to dispose of waste. While recycling has a positive impact, Waste-to-Energy is terrible. The energy savings are not nearly enough to make up for the emissions generated!

Packaging waste is often burnt or used for energy recovery, but this doesn’t reduce pollution. Burning waste releases CO2 and other toxic pollutants into the atmosphere.

Recently, a container ship carrying around 4,000 tonnes of waste (including paper) was intercepted off the coast of Indonesia. The illegal shipment had been covered up as soybean cargo and originated from the Netherlands.

The Netherlands is not alone. The vast majority of European countries are exporting their plastic waste!

The E.U. exported around 33 million tonnes of waste in 2020. Roughly half went to countries with high “waste mismanagement”.

Rubbish left or burned in open landfills illegal sites makes its final fate hard to trace. The European Commission estimates that between 15% and 30% of these exports could be illegal.

In 2018 you might remember that China, the world’s largest market for recycled waste, essentially shut its doors, partly due to documentary Plastic China.

The current world dumping ground is Malaysia. A Greenpeace Unearthed investigation found mountains of European waste in its illegal dumps.

Plastic items from Europe and piles of waste at an illegal dumpsite in Malaysia. Photo: Jules Rahman Ong/Unearthed

Was packaging recycling ever going to be enough?

Recycling is as old as thrift. The Japanese were recycling paper in the 11th century and during the second world war, women’s nylons were turned into parachutes. Today, we recycle aluminum and reduce its carbon footprint by up to 95%.

In some cases, recycling is great. It was a great place to start but it’s a terrible place to stop.

It went sour in the 70s when we tried recycling household waste: random materials, food waste, oils, and cheap packaging. We’re now seeing a significant rise in boxes with the growth of e-commerce.

All used packaging can be turned into new things. But picking it up, sorting it out, and processing it is costly and resource-intensive. Plastic and cardboard also degrade each time recycled, meaning they can’t be recycled more than once or twice, eight times for cardboard.

On the other hand, freshly made packaging is almost always less expensive and of better quality.

But then, how come we’ve been told that recycling was the way to go when all these issues exist?

The single-use industry could not keep on selling so much packaging as the concern over its waste as growing.

So the industry sold the public on an idea it knew wouldn’t work — that the majority of packaging waste could be, and would be, recycled.

But the sad reality is that the industry already knew in the 70s that recycling could not handle the flow of packaging waste.

In all that time, less than 10 percent of plastic has ever been recycled.

“There is serious doubt that [recycling plastic] can ever be made viable on an economic basis,” one industry insider wrote in a 1974 speech.

We don’t really mean that we’ve got to stop recycling. But we can’t rely on it that much. We’ve really got to reduce and reuse first.

We need to stop producing so much packaging waste in the first place – and that means pressuring brands to change their packaging practices. 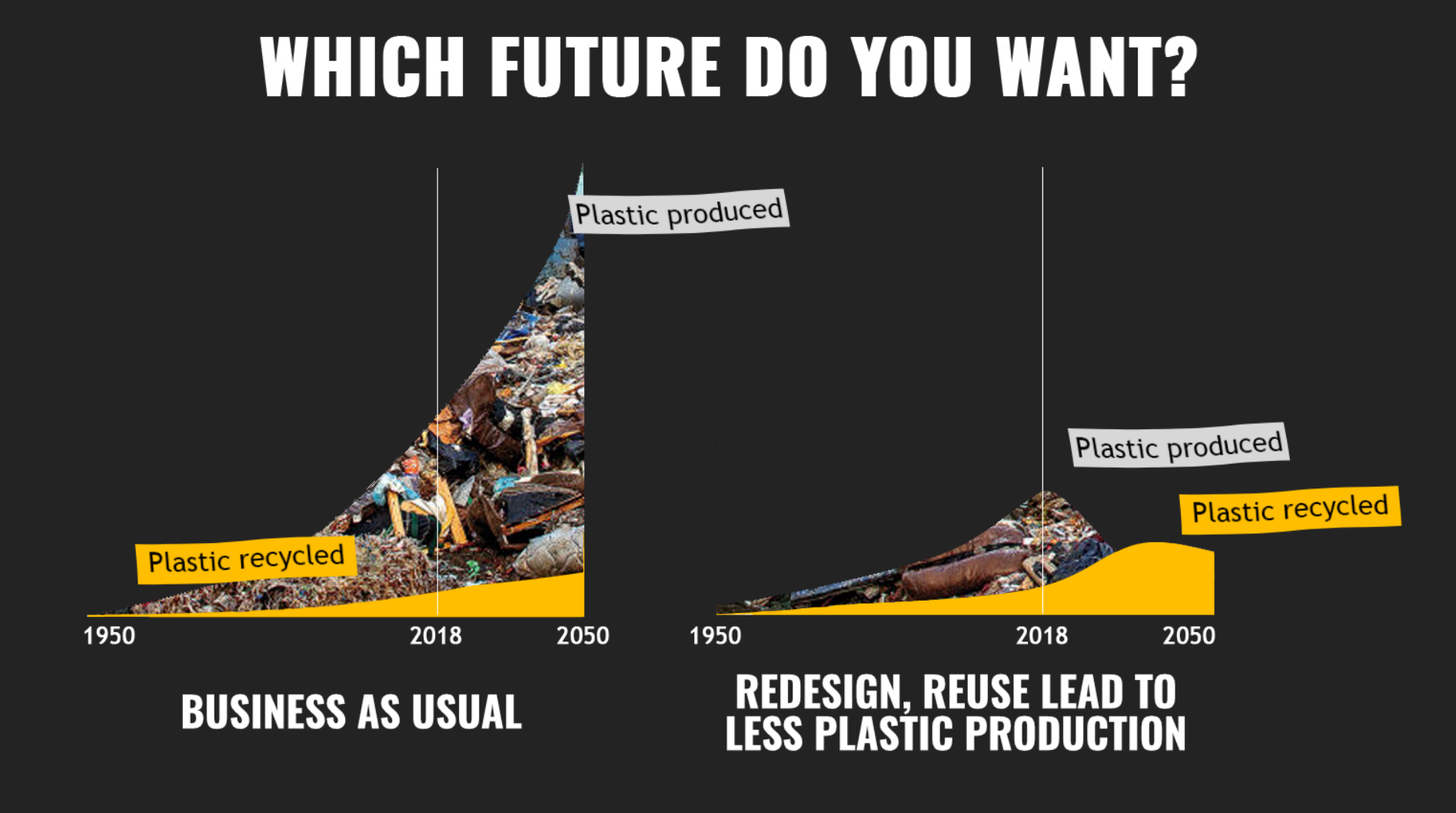 RePack's partner Fashion for Good released a in-depth LCA of reusable packaging in cooperation with Zalando, Otto, the university of Utrecht and more.

As a first attempt to develop shorter cycles for our RePacks, we have partnered with the largest postal company in France, La Poste, for The French...

How JupYeah improved their take-back program with reusable packaging

From a door-to-door service to a flexible online system, the JupYeah ecosystem is tackling clothing waste in Hong Kong with the help of reusable...